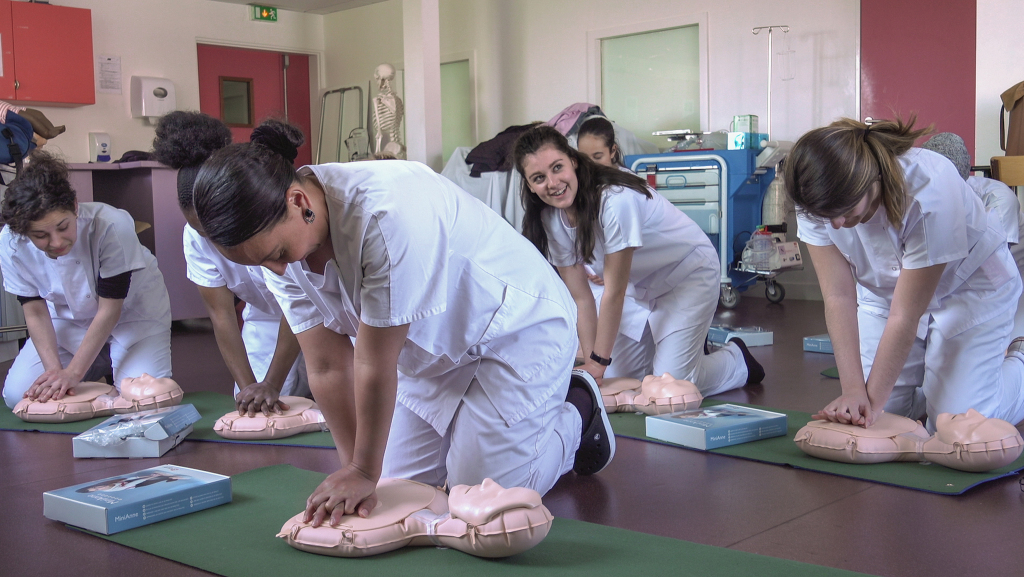 PARIS  — For over two decades, French documentarian Nicolas Philibert has examined his country’s various public institutions with a watchmaker’s calm and anthropologist’s curiosity.

In films like “To Be and To Have,” “La Maison de la Radio” and “Louvre City,” he’s taken his camera into schoolhouses, broadcast hubs and the world’s most famous museum. His latest film, “Each and Every Moment” takes a look at his country’s healthcare system, following a group of nursing students as they undertake their first on-the-job training.

How has the documentary landscape evolved throughout the course of your career?

The documentary landscape has greatly changed in recent years. In France, there are now more documentaries playing in theaters than ever before. There seems to be one or two every week, which means that something between 50 -100 come out every year. Twenty years ago, there were a lot less. However that does not make the process any easier. While there are a greater number of possible financiers, those sources don’t always offer that much money. Today filmmakers turn to local TV channels, crowdfunding platforms like KissKissBankBank and self-financing, and often work with pretty tight economy. Though it’s tough to generalize, because in documentary as in narrative fiction there are rich productions and poor productions and everything in between.

Broadcast and cable have always been key partners in terms of getting the films out there, but they haven’t always been reliable for funding.

There’s real difference between documentaries financed by and for the cinema, and those that are simply made for television. In actual fact, there are very few films financed by the major TV players for the cinema. ARTE produces only three per year, and now Canal Plus is doing even less. Canal co-produced many of my earlier films, but not my latest one. They were never that interested in documentaries, though I used to be among the exceptions.

And there’s a large divide between the films we see at festivals and those we watch on television. They’re not the same by any stretch. Most made-for-television documentaries are journalistic by nature; they often have voice-over and a desire to teach and inform. On the other hand, the docs that get made for festivals have a stronger authorial voice. They’re more singular, more cinematic.  Don’t get me wrong, I don’t in any way look down on journalism, but someone like Wang Bing is not a journalist!

Do your name and reputation make it easier to get projects off the ground?

I have the good luck to have a few years experience behind me; I’m not entirely unknown, so that helps with financing. I might have an easier time than others, but that isn’t to say that it’s always a straight shot. Financing any project still takes time and work. There’s also another element at play: Today, young filmmakers have to give a number of guarantees when applying for financial support, and those guarantees include a detailed treatment. They must present an ordered list of every scene they plan to film, and that simply does not work in documentary, which thrives on the unknown. I don’t always know what will manifest before me, and thankfully I have the good luck to skip that requirement. People trust me now, but I’m not sure I’d have that same benefit-of-the-doubt if I was just starting today.

Do you feel like your filmmaking approach has changed over the years?

I’d like to say yes and no. Yes, because each film required a new approach and a method tailored to the world I was exploring. No, because my methods still have a few invariables. I try not to prepare or research much before I start shooting. I need to save my appetite and curiosity for the actual shoot. If I knew too much going in, I wouldn’t want to make the film. Shooting is a process of learning and discovery, of confronting an unknown world. And so I don’t make films from a perch of knowledge, but rather one of ignorance. I don’t try to tell my audience how to think or how to feel, because I don’t know much more than they do. And that’s never changed.

Your 2002 film “To Be and To Have” was a bona fide phenomenon, and it found international success uncommon to most documentaries. Looking back, what was that period like?

Nobody was more surprised by that whole experience than myself! I never expected the film to have such a life. I didn’t do anything differently and didn’t set out to make a hit. That’s not a good way of working, really – just make the films that you want to make and either they’ll work or they won’t. So when the film sold 1.5M tickets in France and a similar number abroad, I was very surprised! Luckily, I was already 50 years old by that point, so I think I was well equipped to deal with that. I didn’t let it change me too much, and you know, the film I did next [2006’s “Back To Normandy”] didn’t work at all, so life is like that. [Laughs]

At the same time, my film came out the same year as “Bowling For Columbine” and only a couple years after “Buena Vista Social Club,” and those films helped all documentaries during that period. Those successes took documentary out of its ghetto and helped change the public’s perception. The public was shook of the impression that docs were dusty and annoying and saw that they could be joyous and full of life.

Your latest film, “Each and Every Moment”, follows a class of nursing student with observational remove, and it ends with series of interviews. That felt like an interesting new texture for a film in line with the direct cinema school of thought.

I would say that there’s a difference between a subject-to-camera interview and a conversation between two people. When the trainees return from their internships they have a sit-down with their program leaders, and that creates a different kind of interaction than a journalistic interview. The mentors were also trainees at one point, and they’re trying to help their young charges confront their challenges. It’s not easy for an eighteen or nineteen-year-old to be all of a sudden confronted with disease and mortality. It’s hard for them to keep the proper distance – they can’t get too close and lose themselves to emotion, nor can they stay too distant and treat their patients too coldly. These conversations help them work through that, because that’s the next step in their training. It starts with theory, and then on the job practice, and ends with that interaction.

[I understand that] some respond poorly to fixed camera, ‘talking-heads’ style interviews because they seem too easy, [but] there’s been an overall rejection of recorded speech in modern documentary, and I think that’s too bad. There’s nothing more beautiful than speech, interpersonal exchange, and language.

How do you balance your desire to make observational films with your own political points of view?

Well, my films have political dimensions. I’m just not branded as a political filmmaker because I don’t make activist films. An activist film is one that tries to convince, something that has a clear message for the audience. I don’t want to lead my viewers into that position. I don’t tell them what to think, but I do hope the films encourage them to think for themselves. “Each and Every Moment” touches on the economic dimension of healthcare and it talks about the financial pressures facing today’s hospitals if we listen closely to what the characters say. These things are said in passing, because the film is not meant to be a catalogue of complaints.

What are some of those issues?

In today’s hospitals, the value placed on listening and interpersonal relations is getting more and more fragile, and that’s mostly because of money. Everyone has to be fast, and to do the work of two or more people because there’s not enough means and not enough personnel. Those points are all in the film, but I don’t use a color highlighter to emphasize them.

What does a film lose when it tries too hard to emphasize a specific message? It loses everything that makes it cinema. A director that’s too driven to make a statement cannot make cinema. Cinema has mysterious element as well; it’s driven by what we say and what we don’t say. Cinema is what we film and what we leave offscreen. So you don’t need to say absolutely everything, and you should never push too hard.