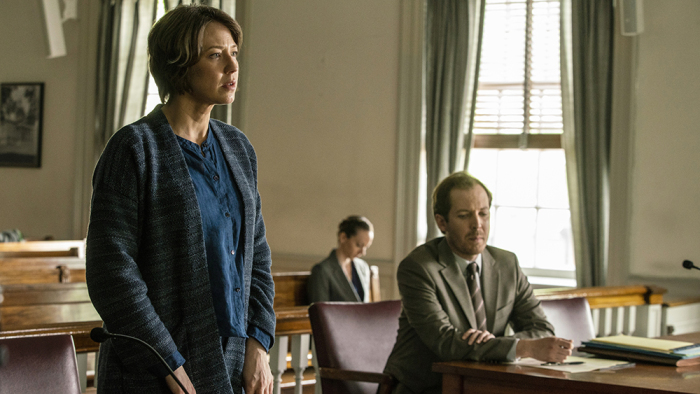 Just a few streets away from a protest in front of the Equinox in West Hollywood on Friday night, “Pose” star Billy Porter weighed in on the controversy. “Leave,” he told Variety in response to the uproar that came after Equinox and SoulCycle owner Stephen Ross hosted a fundraiser for President Trump at his Hamptons estate.

“That’s what activism is,” Porter continued. “It doesn’t work unless you hit these people where their bank accounts are. You don’t get to have these views and rape and pillage from us. That whole business is built on queer people, people of color, the whole business is built on that. So we need to go. It is an us and a they. That’s what it is. I didn’t do that part. That’s where we are and so therefore, my Equinox membership is canceled.”

Angelica Ross, who plays Candy Ferocity on “Pose,” observed that Ross’s political leanings didn’t exactly come as a surprise to the LGBTQ community. “It really does show why during Pride month there was such a rejection from folks in the community of all the corporate logos everywhere, because we knew what was going to happen as soon as the month was over,” Ross told Variety. “We knew as soon as the month was over, we were going to see where their politics really lie. And with Equinox and with Soulcycle and with all these other places, we have to realize that we are voting with our dollars, even if we are not voting at the polls.”

Porter and Ross shared their candid comments on the red carpet, before a discussion with “Pose” executive producer Ryan Murphy at the Pacific Design Center in West Hollywood. FX Networks and Fox 21 Television Studios hosted the discussion, which also served as a celebration for the show’s six Emmy nominations, including a nod for Outstanding Drama Series and Lead Actor. Porter, known for his show-stopping fashion moments, teased his Emmy outfit: custom Michael Kors — off the designer’s Fall 2019 runway show — for the Emmy Awards. “It’s a very Studio 54 vibe,” he said.

Porter was also celebrating another career milestone, which the “Pose” audience caught on-screen Tuesday night. “I had my very first love scene,” he said. “I’m almost fifty. I’m going to be fifty in September. It’s been very profound as an African-American actor, who is gay and out. There’s never been a focus on love or intimacy or being the object of anyone’s affection at all, ever in my life in thirty years, so it’s been a very profound shift. It’s different and it’s nice to see two black men trying to learn how to love each other as opposed to killing each other.”

“Pose” lead actress MJ Rodriguez (Blanca Evangelista) told Variety that she would be bringing her mother as her guest to the Emmy Awards on September 22nd.  “This is the first Emmy awards recognition the show ever really experienced,” Rodriguez said. “She needs to be there to see her daughter being accepted in a way that a lot of people haven’t seen. And to see her daughter, who is also a leading lady of the show, be alongside her ensemble cast and be there and be seen and represented and recognized. So she has to be there.”

During his discussion with Porter, Murphy spoke of the show’s greater significance in the cultural landscape. “The thing that I love about the show is that I feel like the show is growing and growing and your success and MJ’s success and Dominique [Jackson’s — who plays scene-stealer Elektra Abundance] and everyone on the show,” he said. “I feel like everybody feels unseen in some way. It’s a universal truth. So when you put something on the air and people are like, ‘I see you. I see how you are.’ I think, ‘That’s why I love television.’ I think that’s the power of the medium.”

“Yes, and that’s why I’ve always wanted to be on it, “ Porter replied, to which Murphy exclaimed, “You’re a TV star now!”