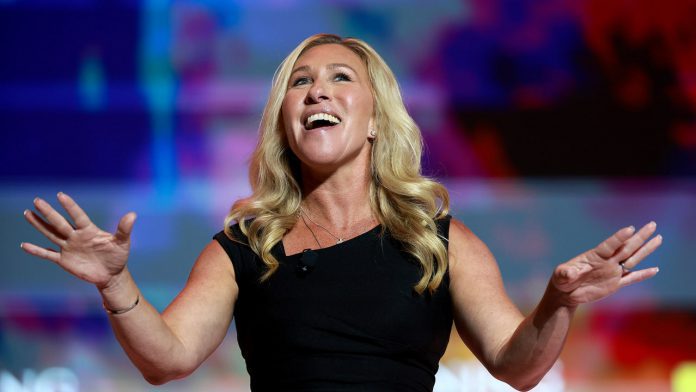 Last November, we noted that there were few scarier phrases in the English language than “Donald Trump has kicked off his third bid for the White House,” except maybe “…and Marjorie Taylor Greene is his running mate.” Unfortunately for humanity, that first waking nightmare has indeed come to pass—and if the congresswoman from Georgia has anything to say about it, the second one is not far behind.

NBC News reports Greene is “angling to be Donald Trump’s running mate in 2024,” according to two people familiar with the matter who have spoken to the GOP representative about her plans for the future. “This is no shrinking violet, she’s ambitious—she’s not shy about that, nor should she be,” former Trump adviser and convicted criminal Steve Bannon told the outlet. “She sees herself on the short list for Trump’s VP. Paraphrasing [the late political reporter] Cokie Roberts, when MTG looks in the mirror she sees a potential president smiling back.” (Earlier this month, the Daily Beast reported that Greene was indeed on Trump‘s short list, along with Representative Elise Stefanik, South Dakota governor Kristi Noem, failed gubernatorial candidate Kari Lake, and Democratic presidential candidate turned Fox News contributor Tulsi Gabbard.) Another person told reporter Jonathan Allen that Greene’s “whole vision is to be vice president,” adding that they believe she should be among the candidates the ex-president considers.

The same sources told NBC News that Greene’s vision explains her “recent efforts to rebrand herself as a politician who can stand astride the divide between the party’s hard-liners and its establishment wing,” and “threw herself into helping elect Rep. Kevin McCarthy” as Speaker of the House. “She’s both strategic and disciplined—she made a power move, knowing it would run up hard against her most ardent crew,” Bannon told Allen, referring to Greene’s break with her pals in the Freedom Caucus, whose opposition to McCarthy led to the California lawmaker losing the Speaker vote a whopping 14 times before his ultimate win. “She was prepared to take the intense heat/hatred short-term for the long-term goal of being a player.”

Of course, Greene can attempt to rebrand herself all she wants, but the fact remains that it will be hard for voters to forget about what they already know about her, the lowlights of which include that she:

George Santos “Shouldn’t Be There”: Republican Infighting Spills Over at Joe Biden’s State of the Union

Idaho Murders: Inside the Lives of the 4 Victims