Rihanna celebrates Crop Over with Bantu knots, green eyeshadow, and a feathered dress 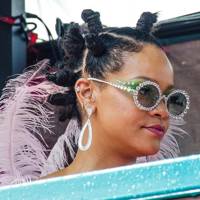 I freak out when Rihanna does pretty much anything, but I’ve got to admit she is at her absolute best during carnival.

The makeup and luxury-fashion mogul was on the road in Barbados with the Aura Experience carnival band for the Grand Kadooment parade on Monday, and to say that I was waiting to see her costume would be an understatement. In fact, for many carnival-obsessed folks (like myself) and card-carrying members of the #RihannaNavy, seeing the pop star’s costume is like the next best thing to actually being there.

I’ve been watching my time line like a hawk, scanning it to see what Rih wore. This year she went in a bit of a different direction with her costume, while still capturing the joy, campiness, and glamour of carnival.

Choosing to eschew the blinged-out bodywear we typically see on the road, Rih played mas in a strapless pink minidress decorated with giant plumes of pink feathers. The singer was spied jamming on the truck with her hair styled in Bantu knots. She wore green eyeshadow, punctuated by a few rhinestones on her eyes. And to shade her peepers from the sun, she donned a pair of rhinestone, oval-shaped sunglasses.

Costume designer Lauren Austin has created several of Rihanna’s Grand Kadooment costumes in the past. The designer’s been posting throwback photos of previous looks she’s created for the singer. Though we can’t 100 percent confirm she had a hand in this one, it is likely that she did.

Rihanna’s fans have been flooding Twitter with photos and videos of the singer enjoying the festivities and also making me very jealous that I, too, am not on the road to wine up with her.

This look, while stunning, is certainly her least-revealing costume so far. But we stan a legend who pushes carnival costume boundaries. As someone who has played mas a few times, it can be exciting to experiment with different looks. This ensemble is giving me visions of the Giambattista Valli gown Rihanna wore to the Grammys in 2015.

Either way she looks amazing. So I’ll be here obsessively putting away my coins to be able to join her on the road for Crop Over when she (maybe) returns in 2021.

Rihanna’s style & how she defies all fashion rules