The Bachelorette Finale Preview: Hannah Breaks Down, FALLS Down at Final Rose Ceremony! 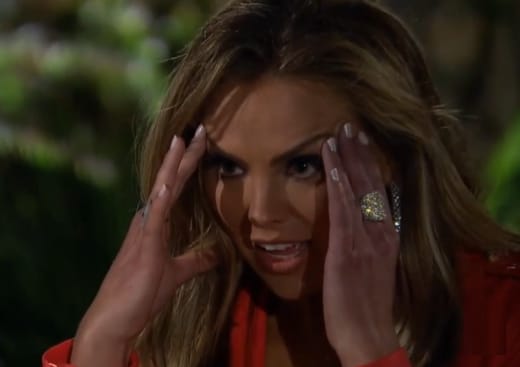 Well, it’s been a tumultuous season (thanks mainly to Luke P.), but we’ve finally made it.

In a two-part finale that begins tonight, Hannah will make a decision that’s certain to change the course of her life.

If you’ve been following our Bachelorette spoilers then you already know who Hannah selects in her final rose ceremony.

But even with that secret out, it seems there’s still plenty more drama to come.

She may have finally cleared the Luke Parker hurdle, but it seems many stumbling blocks lie ahead for Hannah  — literally.

A newly-released preview for the finale shows Hannah suffering an embarrassing fall in the midst of an emotional breakdown.

We won’t find out Hannah’s final pick until Tuesday (Bachelor/Bachelorette producers draw things out like no one else), but we know that everyone who’s still in the running is fully invested emotionally.

And no one has more on the line than Hannah herself.

“Hannah is the person I’ve always wanted to meet. She just feels like a missing piece to my life,” Jed Wyatt says in the finale.

“You have to have that one in a million connection with someone to really make things work, and I do believe that we have that,” Tyler Cameron remarks.

“I’ve never felt this intensely for someone. I 100 percent can see this woman as my wife. Like, 100 percent,” Windmill Man Peter Weber tells the camera.

In addressing the men at the final rose ceremony, Hannah gets choked up:

“I have three amazing men standing in front of me, and this week has been amazing,” she tells her finalists.

You’ve opened your heart to me, your families, you’ve been vulnerable and honest and open, and I just feel so blessed. But I have to continue to make the hardest decisions,” Hannah continues.

“That makes this hard for me, because I’m not just breaking somebody’s heart, I’m breaking my own heart.”

There have been complaints about this season of The Bachelorette, with many griping that Hannah came off as immature and easily-manipulated, or that Luke Parker took up entirely too much screentime.

But those who have seen this week’s episodes — including former Bachelorette Ali Fedotowsky — say that this might be the most dramatic Bachelorette finale ever.

Check out a preview clip and to prepare yourself for the epic four-hour conclusion: