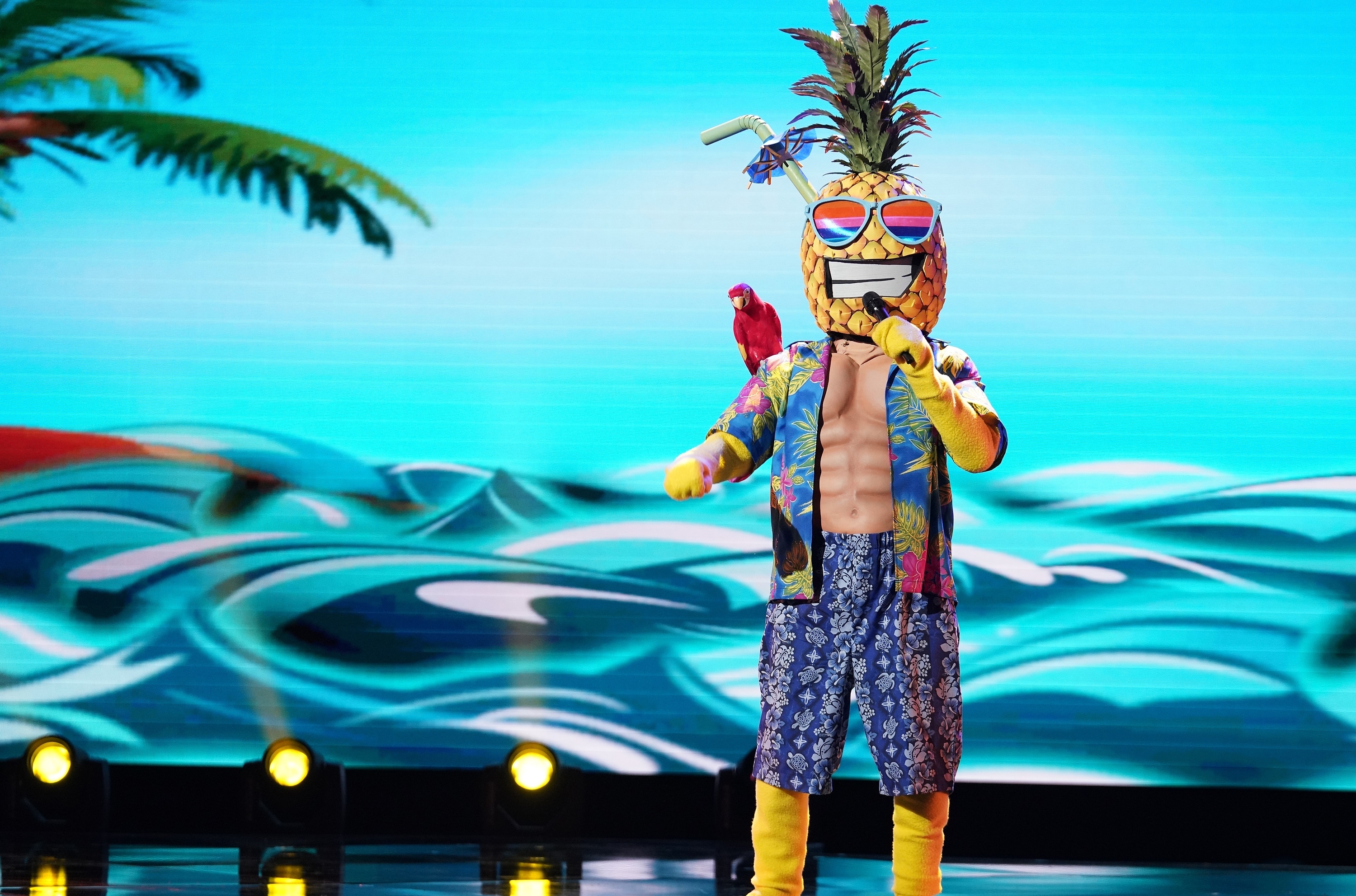 [Warning: This story contains the identity of the celebrity eliminated from the Jan. 9 episode of Fox's The Masked Singer.]

The stoner comedian and musician was disguised as a Hawaiian shirt-clad Pineapple, and sang a rendition of "I Will Survive" (watch, below) as judges Robin Thicke, Jenny McCarthy, Ken Jeong and Nicole Scherzinger tried to guess his identity. Chong followed Pittsburgh Steelers wide receiver Antonio Brown, who performed "My Prerogative" while disguised as a Hippo, in his exit from the series. (Brown had scheduling issues and could not accommodate The Hollywood Reporter's request for an interview.)

Around 9.4 million viewers tuned in for the Jan. 2 debut of the show, which recorded the biggest Nielsen live-plus-three bump for an unscripted series ever (its overnight rating of 3.0 in adults 18-49 grew nearly a full point, to 3.9, in delayed viewing).

Chong, who competed on ABC's Dancing With the Stars in 2014, told The Hollywood Reporter in his exclusive first interview about his time on The Masked Singer that he didn't hesitate to say yes when he was asked to participate in the show — even before he actually knew what it would entail.

"Any time you're asked to be on a major show, the first impulse is to say yes. And then the second question is, 'What do I do?' When I found out that it was singing, it was a challenge," Chong told THR. "I love challenges."

Of the four judges, only McCarthy came close with her guess: She thought Pineapple was Chong's longtime comedy partner, Cheech Marin.

Below, Chong —  who was as jovial and laidback as one would expect — explains why he agreed to participate in the series, how he was able to keep his role a secret and why he thinks The Masked Singer will be a huge hit.

THR: Did producers explain the premise of the show to you? Because when you describe it to someone, it sounds like the most insane thing ever.

Tommy Chong: Well, yeah, they did — very slowly. All us actors do, we say, "OK, when do I get paid?" That was the only question. And when they explained that we're going to be behind a mask that was even better, because if you're not a singer then it helps to be hidden.

I'm an old pro. I've never turned down a job — oh no, I have — I turned down a Disney job one time. Lion King, by the way. It cost me a million dollars or so, but I thought the Cheech and Chong brand would be sullied if we all of a sudden became a Disney character. But that was my only mistake. That was the only show I ever turned down. But other than that, I don't turn down to work at all. You never know!

You and the rest of the celebrities had input in the creation of your costumes. What kind of feedback were you able to give to this pineapple surfer man?

They gave me a choice. And of course I went right for the shorts and the Hawaiian [shirt] because, you know, Cheech and Chong, we're gods in Hawaii. So I said, "Yeah, of course, this is the only one I would do." And they had a parrot and everything. It was quite funny. I loved it. I thought it would be the most comfortable too.

For filming, there was a ton of secrecy involved. You even had to drive to a second location and get picked up in disguise. What was that like?

It was weird, because I've got the biggest mouth in Hollywood. To tell me to keep a secret is dangerous. When my family heard about it, my immediate family, you know, they said, "Uh oh, this guy is going to spill the beans." And so that was really the hardest part, to keep my mouth shut. I would be somewhere and all of a sudden I'd be talking about singing, and my wife would give me that look, like, "Shut up!" So it was tough. Keeping the secret was very tough. But you know, when we got the costumes on and then we had to maintain our secrecy, that was, oh man. Talk about ego being crushed. You know, I'm used to being recognized everywhere and then all of a sudden I'm in a show where I'm not supposed to be recognized. And so I felt like a leper, you know. You're stuck away in a corner and don't talk to him, don't feed him. It was really tough. That part was tough.

At the end of the episode when the panel was guessing, Jenny got it right. Were you worried?

You know, as soon as I saw that she was a judge, I thought, "Oh, she's gonna know. But the funny thing is that she thought I was Cheech. And that cracked me up. Even though she's right, she's wrong! So that was funny.

What did you think about their comments about your performance?

Oh, it was, it was all good! Any time anybody mentions that, you know, I sang and I did a so-so job, that's a big compliment. When you're not a singer — I'm a guitar player. I wasn't a singer. I had to really work hard to just remember the lyrics — which I messed up. But they had a recording of me anyway so they fixed that. But just any kind of compliment about being a singer, it was beautiful. I loved it.

You've been doing this awhile. You know how to perform in front of people.

Yeah, yeah, yeah. But singing is a whole different number. I'm telling you, it is tough. When you're a background singer or just a background player, you can mess up like crazy. No one cares. But when you're the lead vocalist, man — if you're breathing wrong, someone's going to notice. And they know if you're a professional or if you're an amateur. The judges knew right away this is some kind of amateur. I loved the show. It was so exciting.

What do you think of the show? It's a wild concept, but it did well in the ratings last week.

I mean, it's not like they just thought it up. This show has been up and running [in Asia]. It's been up and it's tried and true. It's like Dancing With the Stars, you know, that started in England, I believe. And so they had worked out all the kinks. And so when these shows hit America, they're all ready to go and it's, like, tested. They know the audiences. They've got all the elements. The thing is about drama, comedy or anything, you want the audience to be sucked in. They can't leave until they find out what the answer is, and that's why this show is such a genius show because it makes the audience work. You can't not watch it. You have to watch it. And then you've got to say, "Well, who did it?" It's an old rule of drama. The clock is ticking, you know, you only got so much time to figure it out. It's going to be a giant hit, no doubt.

The Masked Singer airs Wednesdays at 9 p.m. on Fox.

This article originally appeared in THR.com.