The One Scene Amber Heard Wishes Wasn't Cut From 'Aquaman' 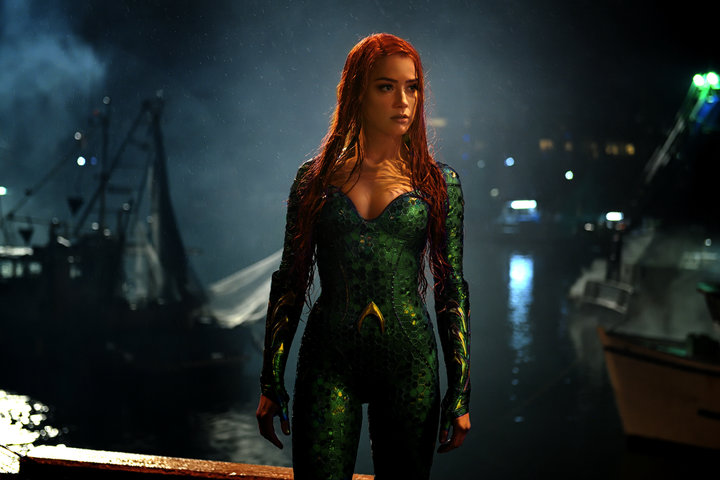 Jason Momoa’s favorite cut scene from “Aquaman” involved a tribute to his mom that arrived in the form of a long fart sound. For Amber Heard, the issue is a little more complicated.

The cut moment she misses is actually from the same sequence her DC universe co-star mentioned, when her character Mera first confronts Aquaman, aka Arthur Curry, outside a bar. He’s with his human father when Mera asks Arthur to join the fight against his war-hungry Atlantean half-brother, Orm (Patrick Wilson). In the movie, her efforts don’t move Aquaman, who leaves the scene with his dad soon after.

But Heard said there was originally a more emotional moment sandwiched in between.

“I am trying to encourage and engage Arthur to take this issue seriously and come down to Atlantis in order to stop the world from being destroyed by this war and this attack I know is coming, because Mera is smart and puts it together before anyone else,” Heard said of the cut scene. “While I’m doing that, I’m trying to engage and encourage this reluctant, insecure, begrudging, hostile and unwilling Arthur at the bar, which is not a place you want to interrupt him or Jason. In that moment I lean into the truck, where I’m speaking to him through the window, and I have a moment of vulnerability. It’s a moment of emotional vulnerability as she’s pleading with him to take this seriously.”

Heard said the exchange was ultimately left out of the film’s final cut, taking away a bit of Mera in the process.

“I don’t know why it was cut, but I think it’s important to keep having and demanding more fuller, more nuanced, more complex and just simply more female characters and representations of women in this industry,” she said. “Especially in this particular genre, because we lack the opportunity to the see the nuances in the humanity. When you don’t have that representation, you take away that with which we can resonate, and that’s an important element of acting and being in the audience and storytelling. Without having the ability to resonate with a character, you are taking the ability to have that character really be important.”

Don’t get Heard wrong, she’s thrilled to play “a badass, empowered, strong driven character who’s a formidable partner in her own right and truly a driver of the story and the other characters,” while also, yes, “a woman.”

“But I do think having more representation allows for the gradation, the shades of in between, the inherent things that make us human, which are those little nuances. So despite being strong, there is an element of humanity and weakness and vulnerability [to her character],” she said. “Because [women’s] roles are so limited, it can be really hard to get the potential to do that … It’s great that they kept the strength, that’s what I’m really happy about. I wonder if it wasn’t just because they were afraid of having any vulnerability shown because I am one of the few women in this world.”

Heard applauded her character’s strength, however, saying, “It was an intended goal and an intended effort on all of our parts to maintain … and fortify that strength and protect the integrity of the characters.”

Besides Heard, the women of the “Aquaman” world include a kaiju voiced by Julie Andrews and Nicole Kidman as a butt-kicking Aquamom. It’s a formidable group, but, as Heard explained in the the remainder of our interview, she’s ready for a lot more nuance and a lot more representation in the DC superhero universe.

There’s a female-driven DC movie, “Birds of Prey,” coming up. What are your thoughts about an all-female DC superhero movie, and Mera possibly appearing in one in the future?

Yeah, it would be awesome.

So where do you see Mera next?

I want to do a DC female action lineup, an all-female DC superhero film. That or a Mera spinoff.

Whoa. A Mera spinoff? Have you pitched that actually?

When they’re in Sicily and the Atlantean guards catch up with them, and so does Black Manta. I think it’s a scene I love because Aquaman and Mera both respond to the attack with Black Manta with agency. They both get up. They both respond with their own power in their own way. Neither need to help the other, and that sequence is so fun. They’re all fighting their own battles.

Yeah, and Mera has a smile on her face right before the fight starts.

I think she knows she’s about to throw down, and she knows how to fight.

Right before that scene, you eat a rose. What was that like?

Oh my God, let’s just say smell can be deceiving, I guess. The smell doesn’t match the taste. I was quite disappointed. I still can’t ever look at a rose again. I’m joking. I love roses.

Wait, you ate an actual flower?

Yes, it’s a real rose. And you know with these especially large-scale movies, [they] require not only many, many takes but multiple setups and angles and versions. So whereas you might do an action, say, 50 times for a scene, in this you do it 500 times.

That’s a lot of flowers.

What’s something you liked about Mera that you think really shows who she is?

That little smile in the fight sequence and the fighting itself. I trained for a long time in martial arts. I trained for like five hours a day for five months, got to Australia and continued through pre-production until the schedule got so demanding that I literally could not do both that and my actual filming job. So for probably eight months total.

Oh wow. So are you like a black belt now or something?

You’ve all been in these DC/“Aquaman” roles for around five years now. Have you ever bumped into Adrian Grenier, who played Aquaman in “Entourage”?

No, I haven’t, but I think it’s funny because his Aquaman, as a character, is kind of teased a little bit. They make fun of him as a superhero, and then Zack Snyder and James Wan cast that man [Jason Momoa] to play him. Like, no one’s making fun of him [Laughs].

Since you’re an aqua-person, what do the aqua-people think of “Baby Shark”?

I don’t know what that is.

No, but it sounds like someone’s going to have to show me “Baby Shark.”

I can’t believe it.

I have to see this … I’m looking up “Baby Shark,” by the way. I’m literally watching it. YouTube? Just “Baby Shark”?

Wait. Which one has 2 billion? This?

How have I not seen this?

It’s the only thing that makes my nephew stop crying.

This is the cutest thing I’ve ever seen. Aww!

That is amazing. That’s the cutest thing I’ve ever seen.

So … what’s the reaction of the aqua-people?