TVMaskBest Source for Celebrities News, Movies & TV Shows
HomeCelebrityThe Oscars Are Only As Hellish As Everything Else Going On In...
Celebrity 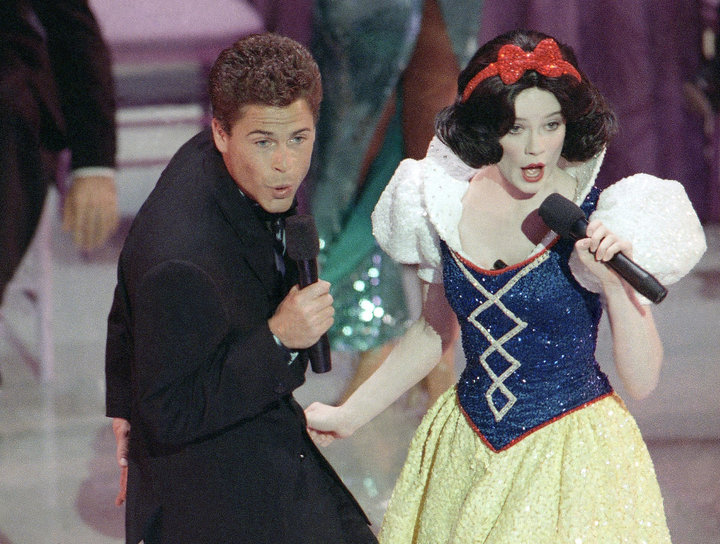 The last time the Oscars went without a host was 1989. The results were infamous. A helium-voiced Snow White opened the show in a flamboyant 11-minute musical ensemble that paired her with Merv Griffin and a tone-deaf Rob Lowe, fresh off making a sex tape that would turn into a scandal. The stars in the audience ― Michelle Pfeiffer, Tom Hanks, Sigourney Weaver ― couldn’t hide their grimaces. Later, 19 up-and-coming thespians, including Patrick Dempsey and Ricki Lake (?!), sang an original number about how great it would be to win an Academy Award; today, their collective nominations total zero.

A subsequent issue of the Los Angeles Times devoted its entire letters-to-the-editor page to hate mail criticizing the show. Daunted by the dent to its image, the Academy of Motion Picture Arts and Sciences, which presents the awards, assembled a panel to review what went wrong, responding to an open letter in which Julie Andrews, Paul Newman and 15 other Hollywood dignitaries labeled the ceremony “an embarrassment to both the Academy and the entire motion picture industry.” It was the unruly kickoff that did them in, the panel concluded. The next year, new producers were hired and Billy Crystal ushered in the golden age of Oscar hosts.

Call it what you will, but we haven’t stopped talking about the debacle since. “Rob Lowe and Snow White” is an eternal pop culture punchline, enshrined in countless internet roundups ticking off history’s worst Oscar moments. But it’s also the type of train wreck people secretly adore: a frivolous, baroque, self-referential whatsit. And so what did the academy opt to do this year, in the wake of an identity crisis that’s intensified by the day? Go without a host.

Except “opt” isn’t the right word. The 54 members elected to the academy’s board of governors didn’t have much choice after once-scheduled host Kevin Hart failed to offer a satisfying apology for old homophobic tweets and standup material ― one of many controversies to plague the Oscars in the past seven months. No one else in town wanted the job; the six-figure paycheck (a paltry sum for multimillionaires), weekslong prep and unforgiving social media scrutiny have detracted from the glamour once associated with emceeing Hollywood’s biggest event. Instead, producers will recruit celebrities to do Meryl knows what. Sing Queen anthems? Roast all the foibles in a winky musical production? Knit?

Anyone who’s been paying attention to the decisions pouring out of the academy’s ranks in the past half-year might ask: Are the Oscars over?

Ninety-one years in, the Oscars just aren’t what they used to be, back when Bob Hope anchored 19 times, Crystal nine and Whoopi Goldberg four ― and back when it was common for more than 40 million viewers to tune in live. Compared to the 2018-19 awards season, 1989’s fiasco looks quaint.

Beyond the Hart flap, the academy’s desperate attempts to claw its way back into audiences’ good graces have only heightened agita. In an effort to juice ratings following last year’s record-low viewership (26.5 million), the board introduced a short-lived category meant to honor an “outstanding achievement in popular film,” whatever that means. And a short-lived choice to have only the two most famous Original Song nominees perform. (Lady Gaga quashed that one.) And a short-lived question about whether to flout tradition by asking super-renowned people like Oprah Winfrey to present the acting awards instead of last year’s winners. (Anyone who thinks Allison Janney isn’t super-famous is no friend of mine.) And a short-lived, much-derided move to present several less-starry categories during commercial breaks, part of an effort to cap the sometimes unwieldy telecast at three hours ― the shortest since 1973.

All of this arrives on the heels of 2016’s #OscarsSoWhite fallout, 2017’s Best Picture envelope snafu involving “Moonlight” and “La La Land,” and 2018’s hot-take opprobrium surrounding the racially misguided “Three Billboards Outside Ebbing, Missouri.” The drama is up, but the ratings are down. As the Oscars traverse their ninth decade, is anything going right? Why aren’t the professional storytellers who steer the academy better at uniting the American people who consume the culture they’re making?

The latter question is difficult to answer. Any metaphor linking ongoing Oscar turmoil to the American zeitgeist du jour is almost too obvious. Two years into a Donald Trump presidency that has left the country spiraling further and further into political chaos, the Oscars emerge leader-less and plagued by scandals ― a billion-dollar institution in crisis. As franchises and streaming services overcrowd the entertainment marketplace, moviegoing is less of a social unifier, and as a result, the Oscars can’t decide whether to be a tastemaker or a MAGA-esque populist interface. The harsh truth is that nothing on the aforementioned roster of bad ideas is likely to lure in constituents who weren’t already loyal to the academy’s annual Bacchanalia, aside from a few rubberneckers curious what all this frenzy will yield.

For some, this might indeed signal a death knell for the Oscars, which are put on by an organization that, despite recent diversification initiatives, remains overwhelmingly male and even more overwhelmingly white. It doesn’t help that some of the movies in the running for prizes this year are caught in maelstroms too: The director of one Best Picture-nominated film (“Bohemian Rhapsody”) faces multiple sexual assault allegations while another Best Picture-nominated film (“Green Book”) has been the subject of heated debates concerning how Hollywood depicts racial progress.

But I’m not convinced the Oscars are marching toward defeat. Sure, watching the academy fall on its ass like Wile E. Coyote tussling with the Road Runner is as delicious as it is disheartening. Schadenfreude, baby. But strip away whatever personal hang-ups you have about preserving (or ripping up) the Oscars’ customs, and awards season becomes a microcosm for everything going on in contemporary culture. It’s a platform for our national consciousness; embedded within the glitz are mini-audits of what’s happening in government, fashion, technology, social activism, corporate economics and popular entertainment.

With “Roma,” the first streaming original nominated for Best Picture, we can gauge Netflix’s rapid ascendance from disruptor to pacesetter ― a transition that has shifted Hollywood’s economic foundation and uprooted the way we absorb culture. With “Black Panther,” we will see how a blockbuster starring a predominately black cast fares among voters two years after “Moonlight,” and whether the group is willing to embrace the comic book genre’s staggering market share. In “Green Book,” we realize how little the think-piece ecosystem resonates offline and how askew Hollywood can be when it comes to mainstream depictions of racial identity at a time when America is finally starting to reconcile with its own history. With “A Star Is Born,” a former front-runner that now feels like a second-tier contender in many categories, we get a sense of whether there’s still an appetite for old-fashioned, weepy crowd-pleasers in the vein of “Titanic” and “Terms of Endearment.”

All of that will get filtered into our living rooms, where things become personal. In the end, the ceremony has little to do with the notion of honoring the best movies ― a delusion that treats the Oscars as a meritocracy instead of what they really are: a hotbed for pompous, multimillion-dollar politicking ― and everything to do with just how much the trappings of this three- or four-hour television spectacle can double as an annual checkup for what’s happening in the real world.

In stumbling over its attempts to restore relevancy, the academy unintentionally learned just how relevant it already is.

Considered in total, the Oscars aren’t facing extinction so much as weathering growing pains, just like they were in 1989. Ratings are dwindling because all network television ratings are dwindling, even for the Super Bowl, which reflects another wealthy institution facing sociopolitical dissension. Perhaps this year’s existential crunch is less about the twilight of award shows specifically and more about the final collapse of the monoculture. One-off moments no longer have the power to seize our shared consideration, so a staple like the Oscars loses some of its stronghold. But that, too, is a natural evolution; the very idea of what it takes to be a celebrity has shifted, and the Oscars are, blessedly, one of the few areas that shouldn’t have to recalibrate for that bleak transformation.

Nonetheless, the ceremony will have to change someday, in some fashion. That could mean a streaming service buys the broadcast rights after ABC’s contract expires in 2028, or voting and membership procedures shift to better represent how young audiences experience cinema. Like so much else, the Oscars are trying to find their way in an America that seems to care less and less about anything without a superhero or Snapchat filter at the center. It makes perfect, demented sense that it would try to dumb itself down instead of ask stakeholders to rise to the occasion. But the award-show fatigue the academy tried to combat over the past few months won’t be solved by bumping categories from the broadcast or telling Allison Janney to stay home.

In a moment like this, you realize that everyone’s relationship with the Oscars is different. My therapist, like Gwyneth Paltrow, still hasn’t seen “The Favourite,” even though I told him it was my favorite movie of 2018. My mom, who lives in Louisiana, called her brother racist for refusing to see “Green Book,” and I didn’t have the heart to tell her she should pick a better scapegoat. A woman working at a coffee shop near where Sunday’s red carpet is being set up apparently didn’t even know which network to tune into.

But the point is that almost everyone has some relationship. Everyone with a television or a laptop or an iPhone knows at least a little bit of what’s trickling out of the academy’s hive mind, regardless of whether they approve or whether they watch the awards. It seems practically predestined, in the year of our Relentless Lord 2019, that the Oscars would suddenly encounter a melee of bad PR, backward decision-making and corpulent controversies ― a mess befitting this overworked, beleaguered, easily distracted country.

We can (and should) turn a skeptical eye toward the Oscars, but we can’t deny that they hand society a mirror that reveals more than enough wrinkles. This isn’t the sort of attention the academy asked for, but it’s the attention they deserve. Somewhere, Snow White is vindicated.