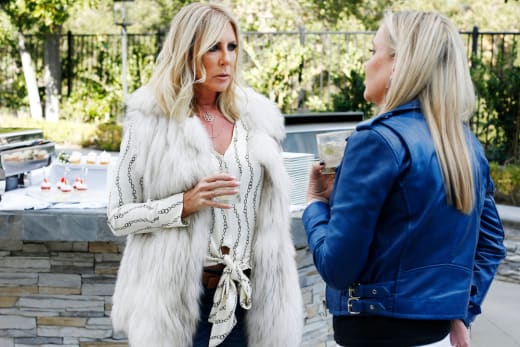 Vicki Gunvalson may no longer be a regular cast member on The Real Housewives of Orange County, but her presence was felt on Tuesday’s explosive installment.

Kelly Dodd decided it was time to get some revenge on Vicki when she learned that her daughter had to make her Instagram page private following Vicki’s claims that Kelly was taking cocaine.

Poor Jolie had received some horrifying messages on the social media site, and Kelly was livid.

Elsewhere, Tamra Judge was put on the spot by husband Eddie about her fraught relationship with Vicki and asked whether she would forgive her former friend.

“There’s a big part of me that just doesn’t trust her anymore,” Tamra replied.

“And when she texts me how she hates Gina [Kirschenheiter], and then I hear from Gina, and she’s like, ‘Oh my God, [Vicki] called me, and she was so nice and sweet!’ When she got a DUI, Vicki sent me the article and was like, ‘Hahahaha.’ So don’t call somebody and worry about them when you’re talking shit about them!”

Eddie wondered why Vicki would act that way, prompting Tamra to say the following:

“Vicki is the most insecure person I have ever met in my life.”

Tamra followed that up with a confessional in which she said she’s “known Vicki for 14 years, and I still can’t figure her out.”

“She’s got a devil and an angel. She’s got like a very sweet motherly person, and that’s the Vicki I like. And then she’s got this horrible side to her. I never know which Vicki I’m getting.”

Viewers were then shown a screenshot of the group chat between Tamra, Vicki, and Shanon Beador.

Beador wrote,” Gina was arrested for DUI last night. And she said I was self-medicating…”

Tamra later told Shannon that Vicki wanted to bring up the pig video. The video in question was an animated pig that spoke with Kelly’s voice.

“You wanna f–k with me, you little pig of a f–king bitch?!” the hilarious video begins.

“That’s exactly what’s gonna happen to you. Don’t f–king text me! Don’t write to me. You blocked me. I can do whatever you want. You look like shit, so hahahahaha, woohoohoohoohoo, hahahahaha.”

But why did Kelly think a pig would hit Vicki right in the feels?

“Slade Smiley called Vicki a pig on stage in front of hundreds of people [years ago],” Tamra revealed.

Kelly knows that’s a sore subject with Vicki. She got very insecure, even had her nose done because she didn’t wanna look like a pig! It’s really a low blow.”

Kelly arrived with her pal and new housewife, Braunwyn Windham-Burke, and immediately said she did not want to meet Vicki.

Vicki greeted everyone, including Kelly, but decided to forego welcoming the new housewife to the fold. However, she chatted up her husband, Sean.

Kelly tried to bite her tongue but quickly made her way over to Emily and Gina to admit that she would “not f–king engage in that bitch. There’s no way.”

When all the housewives were at the table, Vicki popped up, and Kelly made a mad dash away from it.

“Did you ladies hear the nice pig emoji that she did about me, saying that I look like shit?” Vicki wondered.

“Well, regardless, you don’t say that to another woman,” Vicki shot back, and Emily agreed.

“We’re all who we are. I’m a product of my mother and my father — with a couple of little tweaks,” Vicki said.

Emily went to find Kelly and told her about PigGate, and Gina and Shannon were already there.

“Vicki tells them about the pig emoji, but she didn’t reiterate about the, uh,” Kelly said, clearly confused.

Kelly said that she sent the pig emoji because she “didn’t want to type out a whole dissertation on why [Vicki’s] a piece of shit. I just did a mirror image of what she looks like. So oink, oink.”

While that was going down, Vicki told Tamra that she wanted to confront Kelly, but Tamra said that Vicki was just as bad with the cocaine allegations.

“Okay! She called me fat!” Vicki yelled back.

Tamra tried to get Kelly to meet with Vicki to hear what she had to say, but Kelly said Vicki “completely ruined” her reputation and that wasn’t something she was going to forget.

Vicki tried to speak to Kelly several times at the party thanks to a nudge from her pals, but Kelly complained that wanted nothing to do with Vicki.

“Leave me alone!” Kelly yelled as Vicki tried to say that she cared about her.

“You don’t understand what you have done to me!” Kelly shouted. “You have hurt my daughter! Do you understand?! Have you ever seen me do cocaine?! Have you?!”

There’s plenty more where that came from next Tuesday!