Top Gun Maverick trailer is here! Tom Cruise feels the need for speed again 33 years on and is still as cocky as ever in epic first look at sequel

Top Gun hero Tom Cruise roars back into action as Maverick in the exhilarating new trailer for the long-awaited sequel to his military action movie.

Top Gun: Maverick, due for release in June 2020, sees the return of Cruise’s cocky fighter pilot more than 30 years after the original movie launched his career as a global action star.

The 57-year-old unveiled the trailer for the first time during a surprise appearance at Comic-Con in San Diego, California, on Thursday.

In the clip, he still looks devilishly handsome as Maverick but it’s obvious that his rough-around-the edges attitude has caused him to not excel in his military career.

The sequel picks up decades after the 1986 box-office hit and features actor Miles Teller as the son of Anthony Edwards’ pilot Goose, who is killed during a training exercise in the first movie.

Mav is back! Top Gun: Maverick released its official trailer on Thursday afternoon just as the sequel was presented at ComiCon in San Diego, California

Back in action: After 33 years Tom is all smiles as he puts on his leather jacket, aviator glasses and rides his motorcycle

Not bad at all! Cruise still looks youthful even though it has been decades since he played Maverick

The trailer opens with stunning visuals of Tom manning an F-18 jet flying over a sandy desert as it stays very close to the ground.

’30 plus years of service,’ says a high-ranking official played by Ed Harris. ‘Combat metals, citations – only man to shoot down three enemy planes in the last 40 years.

‘Yet you can’t get a promotion, you won’t retire and despite your best efforts, you refuse to die.’

Maverick doesn’t seem too pleased with what he is hearing but knows better than to retaliate.

Back to more flight scenes and the jet is seen again as it pulls up hard, shooting straight up into the sky.

Next up, a aircraft carrier is seen with planes dotting the large vessel. 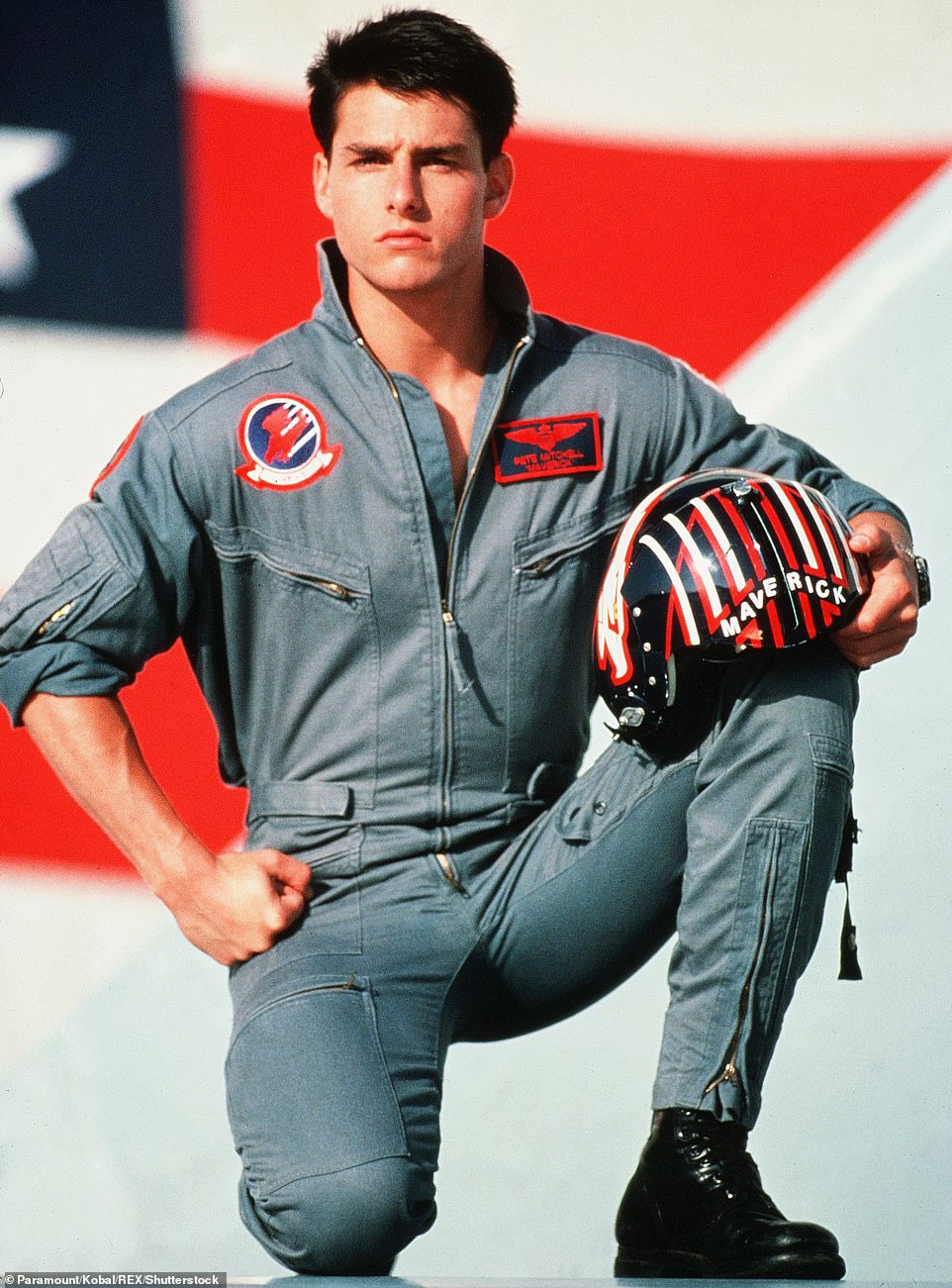 Fresh-faced: The star shot to stardom fast when he played Maverick in the Eighties film

On the go: The trailer opens with a jet flying over a sandy desert as it stays very close to the ground

Visually impressive: Stunning desert scenery is the backdrop at the start of the trailer

Need for speed: There are some breathtaking fighter jet scenes throughout the clip

What’s old is new: A battleship is seen and planes dot the large vessel. A battleship was also featured in the 1986 movie

Time to prepare: Several pilots are seen next to their planes as they take direction

‘You should be at least a 2 star admiral by now but here u are a captain, what is that?’ Harris lectures Tom’s Maverick.

‘It’s one of life’s mysteries, sir,’ says Tom, looking youthful as ever, says, tongue in cheek.

The action star is seen again in his plane wearing his Maverick helmet as he takes off from the aircraft carrier with other jets surrounding him.

The clips then moves seamlessly to a rousing montage where Tom puts on his leather jacket, aviator glasses and rides his high-powered Kawasaki Ninja H2R motorcycle.

Back in the pilot’s seat: He is seen again in his plane with his Maverick helmet on as he takes off from the battleship with other planes surrounding him

Ready to fly: Maverick should be behind a desk at this point in his career but he has his ‘need for speed’

Not kind: ‘You should be at least a 2 star admiral by now but here u are a captain, what is that?’ says a high-ranking official played by Ed Harris

Strong silent type: Maverick doesn’t seem too pleased with what he is hearing but knows better than to retaliate

Chasing his dreams: Just like in the first film, he rides his motorcycle alongside a military jet

His lady friend? There is pretty face by the water – the woman is played by Jennifer Connelly of A Beautiful Mind fame

Tom did all his own motorcycle stunts but when it came to the flight scenes the the actor apparently wasn’t allowed to fly the F/A-18 Hornets used because the US government does not permit civilians to fly military craft.

Like the original movie, there is a bar scene, some fighting, a funeral, and a pretty face by the water – the woman is played by Jennifer Connelly of A Beautiful Mind fame.

One of the most jaw-dropping scenes shows Tom flying through a snowy mountain range.

‘You’re a dinosaur. Your kind is heading for extinction.’ Harris adds, hinting at the military’s move to drone-based remotely controlled craft. 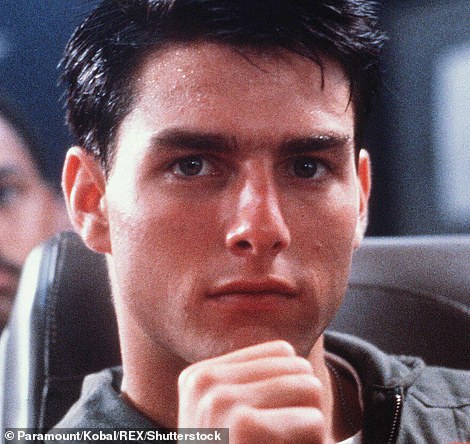 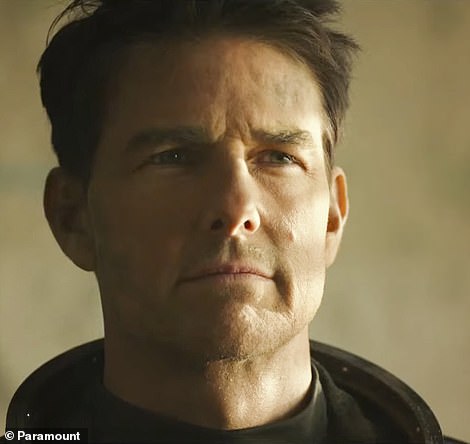 American action hero: After three decades Tom hasn’t lost his passion for action movies and creating his own death-defying stunts. He is pictured here in the original 1986 movie (left) and how he looks today (right)

Action: Mad Men’s Jon Hamm also stars and is seen in military clothing as he walks between some fighter jets

Can he find love again? Tom is also seen hugging the woman though the look on his face says he’s not so sure about her

‘I felt it was my responsibility to deliver for you,’ the Mission Impossible star told the audience.

Cruise’s appearance was all the more meaningful considering the majority of the original Top Gun was filmed at Naval Air Station Miramar and downtown San Diego.

Joe Kosinski (Oblivion) directs the sequel – which was originally slated for release this year – with a script from Peter Craig, Justin Marks, and Eric Warren Singer.

The new film will explore drone technology and Maverick, now a flight instructor, struggling to adapt as he mentors a new generation of U.S. Navy fighter pilots.

A sad loss again? Cruise is seen here at a funeral as he says goodbye to a friend; in the first film he lost his co-pilot Goose

Easy on the eyes: And yes there is a shirtless football scene featuring Glen Powell that will no doubt please Top Gun die hard fans

In flight: Tom is seen flying through a snowy mountain range ‘The end is inevitable Maverick,’ says the older military vet. ‘Your kind is heading for extinction.’ Tom doesn’t not bend: ‘Maybe so sir, but not today’

Connelly, the female lead, plays a single mother who runs a local bar near the Navy base.

Val Kilmer is reprising his role as Maverick’s rival, Tom ‘Iceman’ Kazansky, though he was not seen in the trailer.

Can not wait for this @TomCruise. When that music started on the trailer I got goosebumps and felt so emotional. #TopGun is my all time favourite movie. I’m sure #Maverick will end up being a box office smash too,’ another wrote. 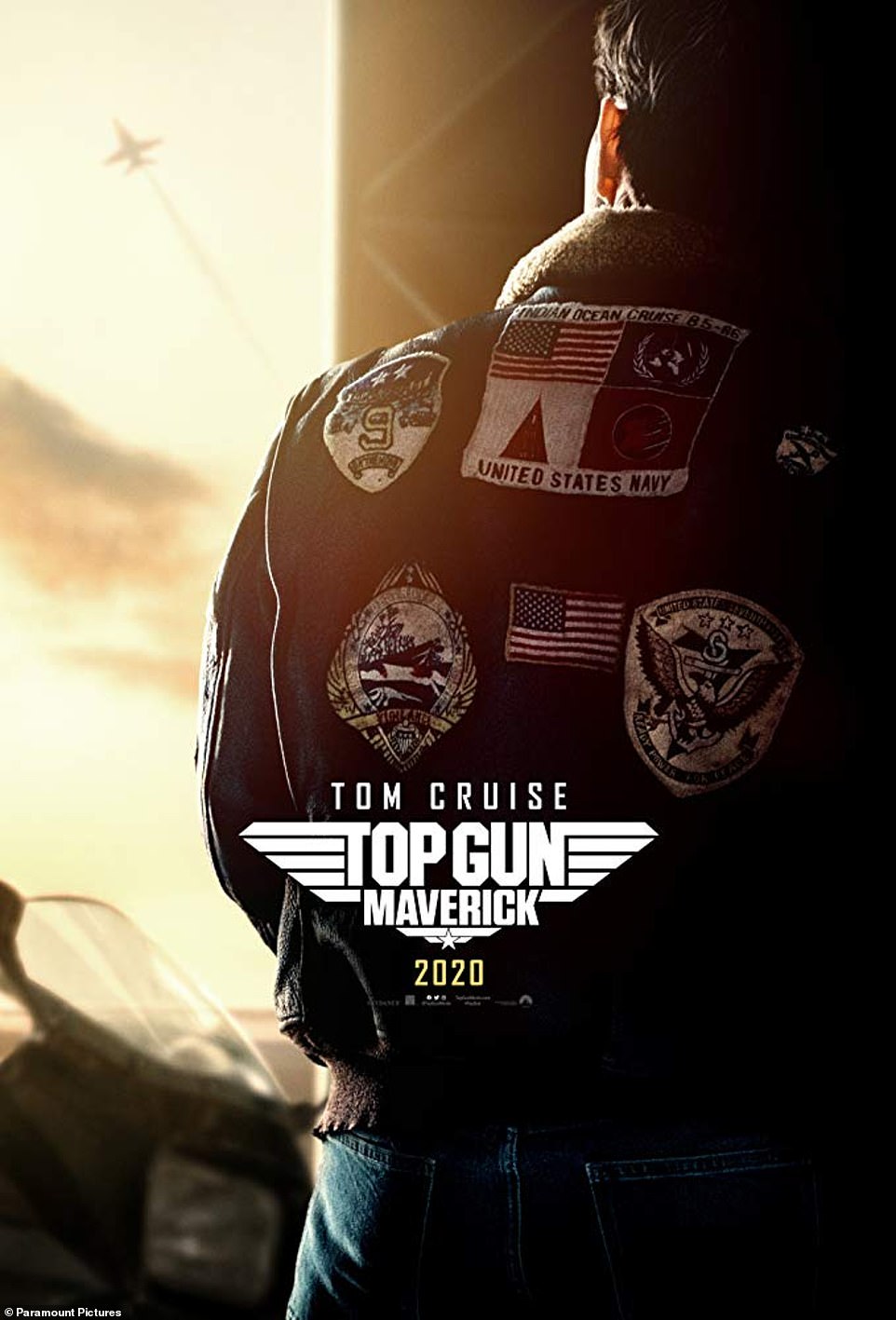 New! Also on Thursday a poster for the film was shared; the film comes out June 26 2020 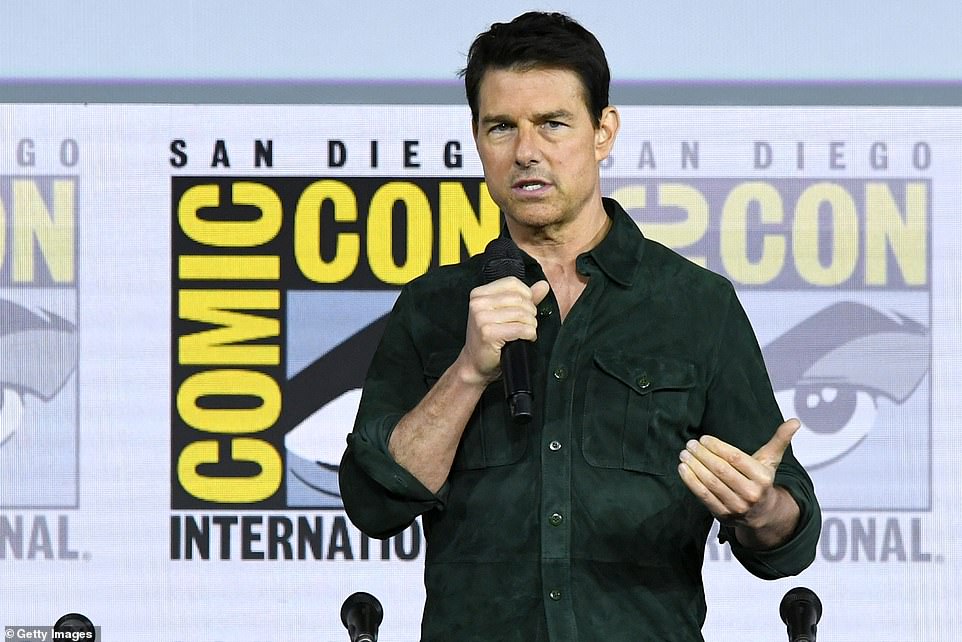 New movie alert: Tom Cruise stepped out at Comic-Con to speak at the Top Gun: Maverick panel on Thursday 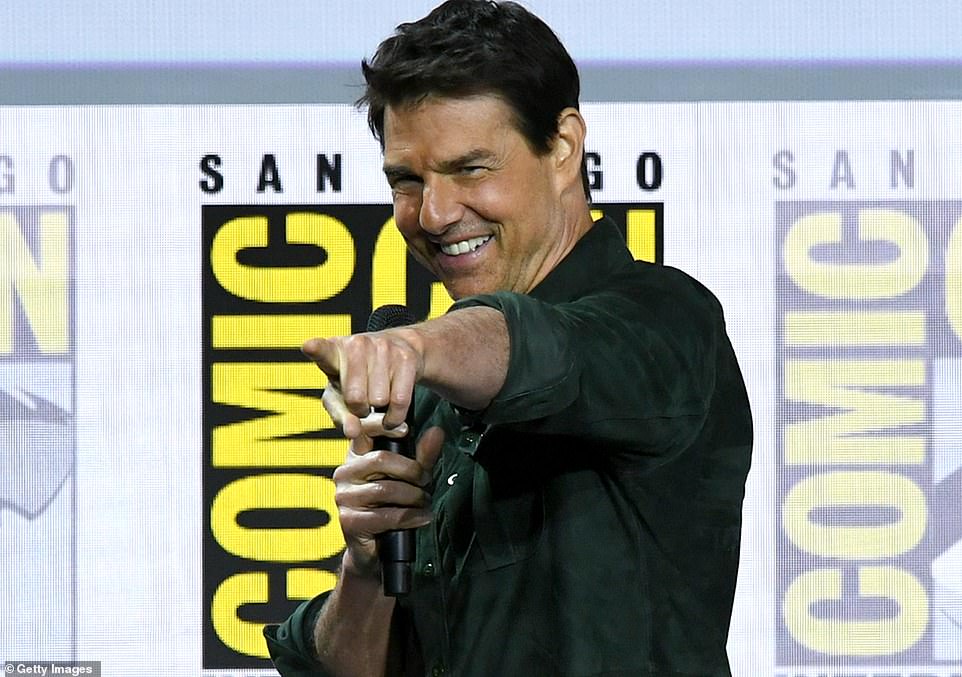 Having fun: The star had fun with the crowd and pointed at a fan as he spoke on the panel and helped premiere for the first look trailer 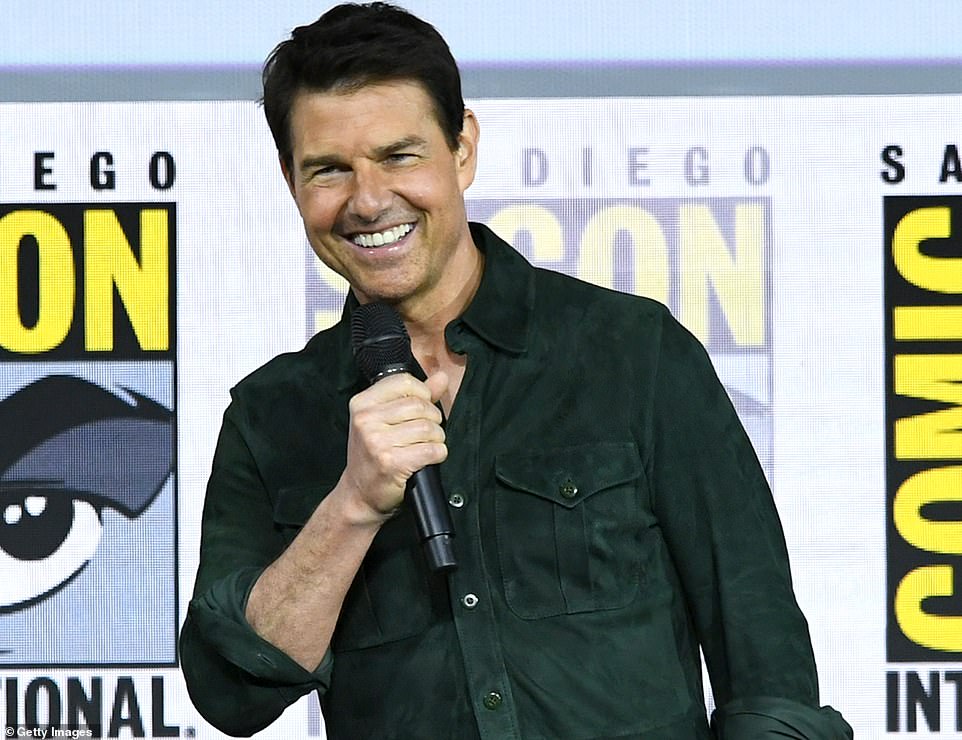 Long wait: Fans will have to wait a bit of time, the new movie isn’t expected to be released until June 26 2020