Tyler Cameron Spends Night with Hannah Brown and You Know What That Probably Means! 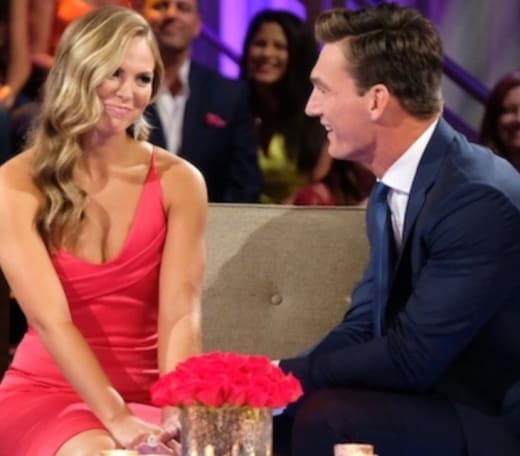 We’re trying not to read too much into this.

… because Tyler Cameron was just spotted with Hannah Brown.

On Friday morning around 10 a.m.

On his way out of Hannah Brown’s Los Angeles residence.

TMZ has published photos of Cameron on Brown’s doorstep, a seemingly very satisfied smile on The Bachelorette’s face.

Hannah, of course, rejected Tyler on this week’s Season 15 finale, selecting Jed Wyatt to be her husband instead.

HOWEVER, Brown learned two days  after accepting Jed’s proposal that he had been lying throughout their relationship and actually had a girlfriend bach home.

“I am not with Jed anymore,” Hannah confirmed to Chris Harrisonin on the After the Final Rose special this past Tuesday evening, adding:

“The engagement is over. We are not together. That’s not what I said yes to…When I said those things, the things I said to him on my engagement day, I thought that was my day.

“I feel like that was taken from me… It’s been really hard to grapple with that, but I know that what I got is not what I ever wanted for a life partner, love that’s not built on a foundation of truth and honesty.”

The entire Internet basically applauded Hannah for this decision.

And then they applauded her even harder when she actually asked Tyler out for a drink on this same ABC special.

“I would love to. Just tell me when, I’m there,” Cameron replied immediately to Hannah’s offer of a casual evening out.

According to an insider, Hannah invited Tyler over on Thursday and he ended up spending the night.

“Tyler got to Hannah’s place around 9 p.m. and they stayed in,” a source told E! News, adding:

“He spent the night with her and left this morning after 10 a.m. She walked him out to his car and they hugged and kissed. He had an overnight bag and they looked very happy together.”

Tyler is still in the running to be the next Bachelor, but this possibility seems less and less likely the more he and Hannah continue their romance.

You taught me so much about myself and pushed me to be a better man. I learned so much from you and so did the rest of Bachelor Nation. You were what we all needed as a lead.

You showed strength and grace in the most beautiful way. You kept it real and gave us all of you. As one chapter closes, another one begins.

The world is yours girl! Excited to see what you do with it.

Yeah. This guy is a keeper.