Umbrella Academy: The Biggest Changes between the Netflix Show and Comics 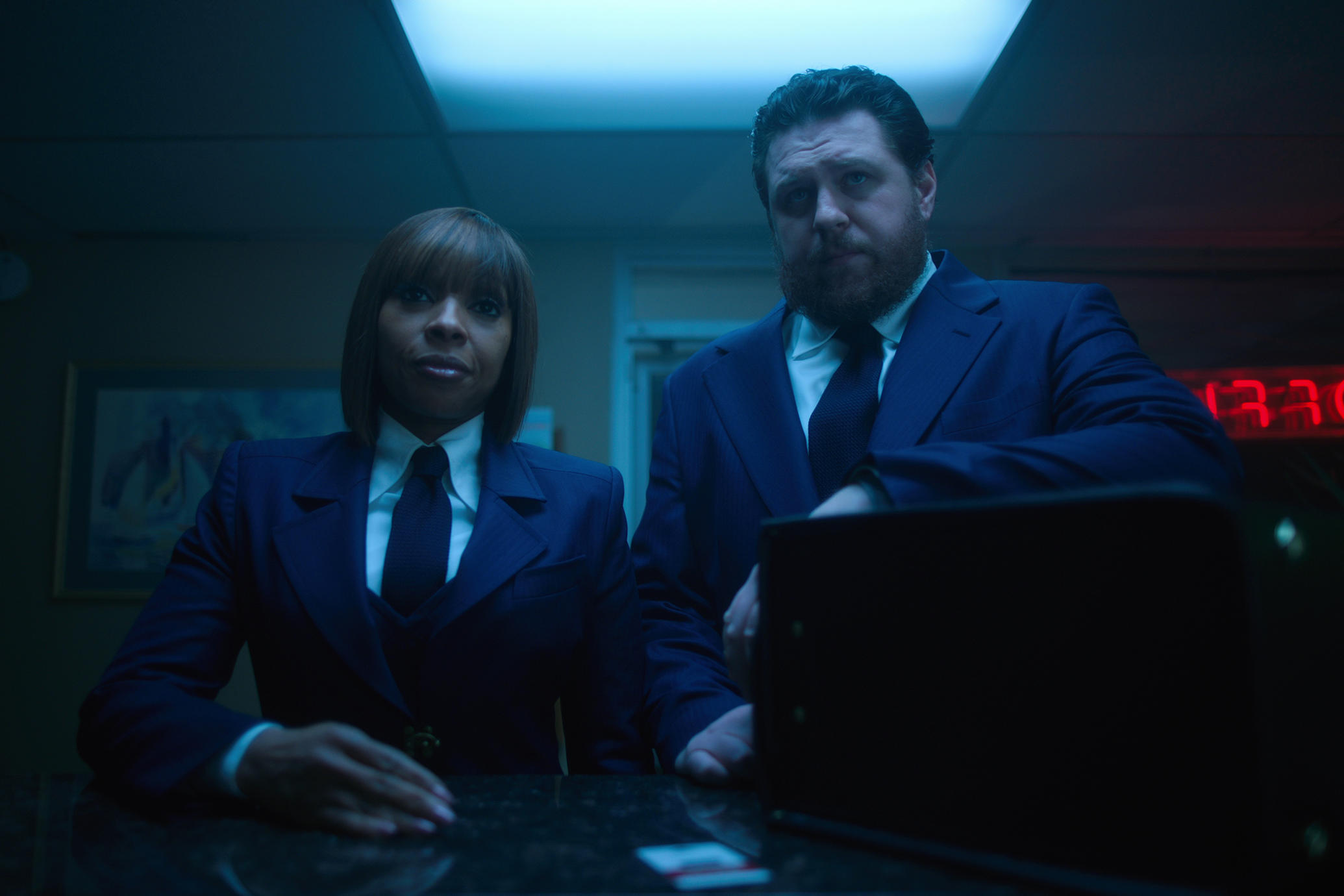 [Warning: The following contains spoilers for Umbrella Academy Season 1 and all the comics released so far.]

Netflix’s adaptation of Gerard Way and Gabriel Bá’s cult comic book series Umbrella Academy dropped Friday in all its weird, exhilarating glory. The 10-episode first season follows a dysfunctional family of superheroes who realize that it’s up to them to prevent the apocalypse after their previously missing brother Five (Aidan Gallagher) returns from the future to warn them of the impending doom. There’s also a pair of time-traveling assassins, a cyborg mom and lots and lots of donuts.

Whether you enjoyed Umbrella Academy‘s signature brand of bizarre or not, it’s hard not to wonder how it compares to the source material — particularly for long-time fans of the comics who have been following the Hargreeves family’s story since 2007. The basic premise for the show’s first season is taken straight from the first volume of Way and Bá’s comics, Apocalypse Suite, but there are also elements that have been pulled from the second volume, Dallas, as well as some straight-up changes. (The third volume, Hotel Oblivion, has released five issues to date, as well, but doesn’t factor into the series yet in any noticeable way.)

To make things easy for you, we broke down the 12 biggest differences between the show and the comics. You can determine whether they were for the best or not.

1. Hazel and Cha-Cha aren’t in Apocalypse Suite at all. It’s hard to imagine the show without our favorite temporal assassins Hazel (Cameron Britton) and Cha-Cha (Mary J. Blige), but the murderous duo didn’t make their first appearance in the comics until the second volume, Dallas, and never were involved in inciting or stopping the apocalypse. Other than their names (and those adorable/creepy masks), the show’s versions of Hazel and Cha-Cha have little in common with the originals. In Dallas, Hazel and Cha-Cha are straight psychopaths with no complicated friendship, no Hazel-Agnes love story and none of Hazel’s dissatisfaction with his job. They also both die in Dallas, but we’re hoping showrunner Steve Blackman finds a way to bring them both back in Season 2.

2. Ben isn’t a major character. The Hargreeves siblings did have a brother Ben (Justin H. Min) whose power involved tentacles shooting out of his stomach and who died, but his ghost isn’t a big part of the comics. In fact, he’s not a part of it at all! Klaus (Robert Sheehan) can channel and speak to spirits in the graphic novels, but Ben’s ghost wasn’t his constant companion, nor did he help in the fight to prevent the apocalypse. The comics still haven’t confirmed how Ben died, but we’re betting-slash-hoping that Season 2 will dive more into his past and explore how he’ll factor into the Academy now that Klaus has the ability to make him at least somewhat corporeal.

4. Vanya becomes a legit supervillain. Scrap everything you know about Vanya (Ellen Page) from the series except for the polarizing memoir she wrote, because the Vanya apocalypse story of the graphic novels is entirely different. In the original story, Vanya gets an offer to join an orchestra that wants to destroy the world by playing a piece of music called the “Apocalypse Suite.” Although Vanya initially declines, her resentment toward her family ultimately drives her to join. The maniacal Conductor (the closest the comics has to a Leonard figure) experiments on Vanya, hurting her and brainwashing her until she becomes the evil White Violin. Like in the series, Vanya then attempts to destroy the world by playing her violin (and kills the Conductor), but instead of Allison (Emmy Raver-Lampman) firing off a warning shot to stop her, Five SHOOTS VANYA IN THE FRICKIN’ HEAD. She managers to survive, but is paralyzed with no memory of the incident.

5. Five’s story is also very different. The basic aspects of Five remain the same: He got stuck in the future as a young boy and was recruited by a clandestine agency (in the comics it’s known as Temps Aeternalis, not The Commission). He broke his contract with them once he discovered how to return to his family in the present day with the goal of stopping the apocalypse. However, there are a few key, and crazy, differences. Not only can Five never age in the graphic novels, but Temps Aeternalis also bound his DNA to that of history’s most infamous serial killers, which is why he’s such a skilled assassin. In addition, and perhaps most importantly, Five’s former boss isn’t a sexy, no-nonsense Kate Walsh type, but is actually a talking goldfish with genius-level intellect. At one point, Five eats the goldfish to enact his revenge on the agency. It’s truly wild and extremely disturbing.

6. A lot of the Umbrella Academy foes are famous monuments. The graphic novels are a lot weirder than the show. A lot. Case in point, there are multiple times in the comics in which the Academy has to fight monuments, such as the Lincoln Memorial or the Eiffel Tower (which turns out to actually be a spaceship being manned by zombie Gustave Eiffel). We definitely understand why they opted to drop these villains for the series, but also can’t stop picturing Tom Hopper trying to punch the Eiffel Tower.

7. Diego isn’t out to avenge a slain ex. Other than Luther-Allison, all the other romances in the series are unique to the adaptation, including Diego’s (David Castañeda) entire storyline with the doomed cop Patch (Ashley Madekwe). And without Patch you obviously don’t get the Diego revenge mission or his inner battle between doing the right thing and doing something the right way. The comics version of Diego isn’t a huge mama’s boy, either. He’s overall a much bigger jerk in the source material, although back in the day he was in a punk band with Vanya and a chimp called the Prime 8s, which is pretty rad.

8. Allison isn’t a famous actress. While it’s clear Allison did abuse her powers — including getting her husband to love and marry her — in the comics, she doesn’t use them to become a world-famous actress. She also lost in arm as a child while held hostage by Dr. Terminal (who was name-checked in Episode 7). They never explain how Allison later appears to have two functioning arms (Is one cybernetic? Did Hargreeves manage to regrow it like she was a starfish? Is it a transplant?), but with all the other insanity going on in the comics, that question is pretty low on our priority list.

9. Hargreeves had a magic monocle. Not only is Hargreeves very much a confirmed extra-terrestrial in the comics, but his monocle also gave the wearer the ability to see the truth about someone and their past. It appears as though the magic monocle was scrapped in the show, seeing as Diego tossed it into the ocean early in Season 1.

10. Superheroes and supervillains aren’t rarities. In the Netflix series, the Umbrella Academy seem to be the only known figures with superhuman abilities, and we don’t see them fight a single super-powered villain (who isn’t one of their own, at least). But in the comics, supervillains, killer robots and all sorts of crazy things appear to be fairly commonplace. In the show, the Umbrella Academy are outliers in a fairly recognizable world, but in the comics the entire universe is slightly larger than life. All right, maybe a bit more than “slightly.” The universe Way and Bá created is batsh– insane.

11. The Vietnam story is pretty much unrecognizable. Forget everything about Klaus accidentally traveling back to the ’60s, being drafted into the army, going to Vietnam and falling in love with David, who tragically dies. None of that happens in the comics. What does happen is Luther, Diego and Klaus all travel back to the ’60s with the purpose of stopping Five from killing JFK. However, they accidentally wind up there too early and have to kill time, which they do in Vietnam by attempting to end the war by finding the mummified corpse of an ancient Vietnamese leader with the intentions of resurrecting him to unite the country. During this period, Klaus also has a baby and runs a brothel/club that funds his building of a televator, which is a teleportation device Hargreeves invented.

12. The comics are disappointingly white. Despite having been adopted from different parents from all around the world, the Hargreeves siblings in the comics are all white. And while the series is definitely not a leader when it comes to inclusivity in casting, they at least made an effort to improve upon the comics. Now, it’s hard to imagine the show with anyone else playing the parts that went to Emmy Raver-Lampman, David Castañeda, Mary J. Blige and Justin H. Min.

Umbrella Academy is available to stream on Netflix.