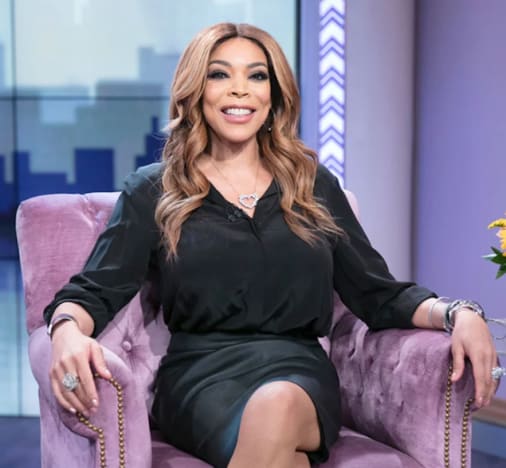 Wendy Williams is back on the air.

But she is officially off the market.

The talk show host made that very clear on Monday morning, discussing her very own love life as part of her Hot Topics segment.

“I’m not on the market anymore,” Williams revealed close to the opening of her first new episode in five weeks.

The 54-year old then grew both giddy and emotional as she spoke to her studio audience.

This object of Wendy’s affection is NOT the young boy toy and ex-convict with whom she had previously been linked, either.

“Listen, it’s not who you think,” Williams went on to say, addressing chatter about her relationship with 27-year-old Marc Tomblin. “OK, mother doesn’t deal with children.”

Fair enough. Who does she deal with in that case?

“It just so happens that, I guess with my charm and wit, I attract people of all ages,” she continue.

This was Wendy’s rambling way of saying she’s a “hand holder” — and that, yes, she was spotted holding hands with this Mark person.

But the two are definitely not an item.

While 27-year-old guys do find her “very attractive,” Williams was not too shy to admit, when it comes time for the comfort of a man, the television personality said she needs “somebody in his 50s too.”

“And he’s gotta work. It helps that he’s a doctor,” Williams added to raucous applause, concluding of her relatively new boyfriend:

“I am not gonna say one more word, you’re not gonna blow this for me. But he’s been married, his kids are in their 20s and yes, he’s black.”

Williams said she would name the guy just yet, but made a point to emphasize that he’s in terrific shape.

During her first episode back, Williams also addressed a headline from the Globe saying Williams was getting “sweet revenge as $ 50 million divorce turns ugly.”

(Wendy finally filed to divorce Kevin Hunter several weeks ago, following years of him cheating on her and even welcoming a baby with his long-time mistress.)

While she didn’t bring up her estranged awful husband by name, Williams did feel a need to mention the aforementioned article and headline.

“When I saw this [headline], I almost passed out right there. I bought all of them at the airport. Listen, my family is doing fine and I am doing fine.”

We actually are happy to hear that.

Because although we find Williams to have a grating personality and a very irritating TV persona… and while we wish she’d stop trashing other celebrities and speculating on their lives just garner herself attention and ratings… Hunter very clearly sucks.

No person deserves to be treated the way he had been treating her.