TVMaskBest Source for Celebrities News, Movies & TV Shows
HomeTrending'You don't need to depend on a man and his power to...
Trending

‘You don’t need to depend on a man and his power to be happy and successful’: Raye gets candid about creating success on her own terms 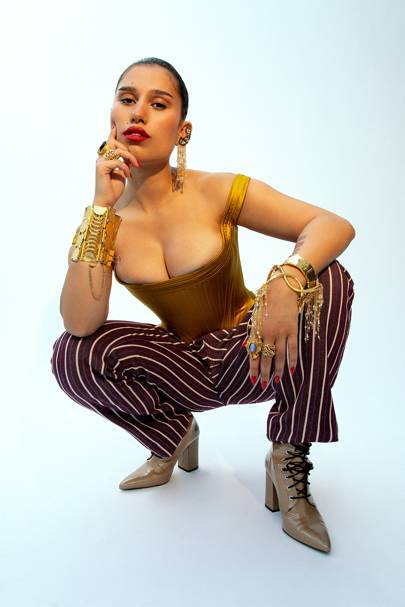 Raye is having one hell of a year. She’s collaborated with Drake, Stormzy and Khalid, and now the singer-songwriter has teamed up with Beyonce for the new Lion King soundtrack. And, did we mention she’s only 21?

When Raye’s not killing it on stage, she’s working tirelessly to expose and eradicate sexism in the music industry. “It’s consistent and it’s endless,” she says. “We’re in very male heavy environments – the artist is often the only female in the room – and the line is crossed a lot. It’s not ok and we need to talk about it.”

Here, Raye opens up to GLAMOUR about the pressures women face in the music industry, why we need to stick together and make noise, and what it was like to collaborate with Queen B.

People are quick to assume they know your music and your abilities and it’s easy to be undermined. Right now, female artists are exceeding all expectations. We’re inspiring each other and working really hard to implement change. When I was starting out there used to be so much competition but we’ve finally realised there is room for everyone. I’ve made so many beautiful female friendships within this industry. This job has taken me to the lowest of lows and it’s those female artists that have picked me up.

We’re heading in the right direction but there’s still a long way to go. As a female artist, there is a lot of pressure and stress to look good all the time and conduct yourself in a certain manner. If a man is determined, strong and not afraid to lay down the law and demand what they want, they’re a boss, and yet when woman does it, they are called a bitch. We need to figure out these guidelines. How can you be polite and kind but still be fierce and stand up for yourself?

Absolutely. It’s consistent and it’s endless. It can be anything from a small comment where male producers prevent you from having an opinion – I got into production because I was sick and tired of people making me take a backseat – or more extreme forms where men can be entirely inappropriate. I’ve had men put their hands on my legs. Last week, I was communicating with a powerful man about my music and he said if he made it happen, he would want to take me on a date. It’s just not on.

If we don’t talk about it, nothing will change

In the past, women endured sexism and didn’t say anything about it. I experienced some awful things when I was younger and I didn’t talk about it because I thought it was something I should put up with as an artist but I didn’t realise how much it was affecting me as a person. Now if anyone makes an inappropriate comment, I will flag it regardless of who the person is. We’re in very male heavy environments – the artist is often the only female in the room – and the line is crossed a lot. It’s not ok and we need to talk about it.

Women need to stick together and make noise

I’ve written hundreds of songs about the female experience because I feel strongly that we need to stick together and make noise. I’m loud, boisterous and not afraid to confront someone but there are a lot of women who will be too afraid to stick up for themselves. I don’t want to give men any excuses so I talk about it a lot through my lyrics. It’s tough to navigate but I’ve got my head on my shoulders.

That it’s ok to speak up when someone is treating you badly or being inappropriate. Don’t be afraid to say goodbye to those people or situations. You do not need to depend on a man and his power to be happy and successful.

It was a bucket list moment collaborating with Beyonce

It was incredible, a true bucket list moment. She’s one of those artists who I’ve grown up idolising. I used to listen to her on YouTube and feel like a queen. I never would have imagined at 21 I’d had a Beyonce song under my belt.

I’ve learnt so much from collaborating with incredible artists

The craziest thing I’ve learnt is how human everyone is. I’ve been really enjoying getting to know people on a human level because that’s when I’m the most successful writer and collaborator. The artists who are the biggest names are often the most down to earth.

You collect advice as you go along. With Rita Ora, it was her incredible work ethic. She does not stop. That drive really inspired me. It’s also her empowering attitude. Like me, she really shouts for women and goes above and beyond to support fellow female artists. She makes everyone feel special.

Share
Facebook
Twitter
Pinterest
WhatsApp
Previous article
D.A. Pennebaker, Master of Cinema Verite, Dies at 94
Next article
Joshua Jackson and his GF get a marriage license… weeks after he was seen kissing a mystery women